If Lanaudière and Mauricie were… 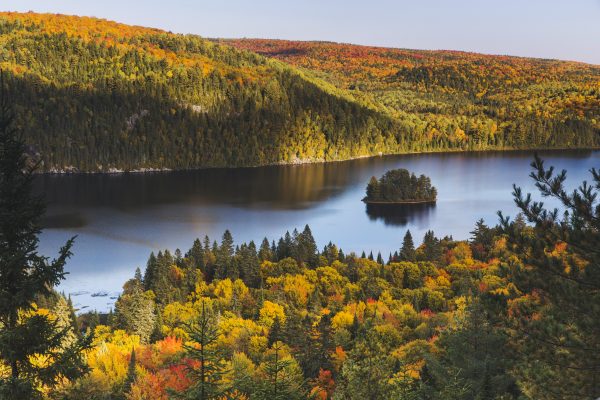 A colour?
The entire landscape is a painter’s palette! The green of springtime, the blue reflections of lakes on a summer day, the fiery colours of trees in autumn and, of course, the white mantle of winter that blankets trails.

An animal?
Let’s see… A duck in wolf’s clothing? The common loon is the symbol of La Mauricie National Park while the Eastern wolf is that of the Mont-Tremblant National Park. Loons, wolves, bears and moose–opportunities to observe the wildlife are legion in these regions.

A song?
A tune by Félix Leclerc. Québec’s beloved songwriter was born in La Tuque in Haute-Mauricie, and his songs depicted his love for the land. In La Drave, he sings about the daily struggles of the lumberjacks and log drivers of yore. Lanaudière’s contender also packs a punch. She’s a world-famous diva. She has the Power of Love. The one and only Céline.

A flavour?
There’s a local flavour that captures the essence of Authentic Québec’s land and lake. It’s the taste of smoked trout. This is the flavour of local passion and know-how that you can sample along culinary field trips. It’s a taste of the landscape!

A house?
A log cabin in the woods, you betcha! You can’t get a more Canadian experience than being in a log cabin next to a lake. Fish for trout in the day and watch the stars next to the campfire at night. An everyday dream made possible by numerous fishing outfitters in Lanaudière and Mauricie!

A story?
A tale by local storyteller Fred Pellerin, who lovingly depicts the wonderful simplicity of village life, now and then. Or, maybe a story by Bryan Perro brimming with fantastic beings. Two authors deeply rooted in Mauricie.

A road?
Chemin du Roy (King’s Road)! The first rideable road, whose first leg dates back to 1660 in what was then Nouvelle-France. The road connects Québec City and Montréal through Trois-Rivières. You can still travel the 280 km of expressways mapped onto the trail blazed by Chemin du Roy along the St. Lawrence River. This scenic path will take you through the two regions, heritage sites and even time.

An event?
A festival! One that is a thrilling yet family-friendly gathering like the Festival Western de St-Tite. This is the yearly jamboree for cowboys, cowgirls and anyone who loves anything from country music to western wear. Or it could be a fancy festival like the Festival de Lanaudière which gathers together the world’s top headliners in classical music. Have your pick!

An adventure?
The legacy of the men and women who have shaped and are still shaping the regions of Lanaudière and Mauricie: from the Indigenous peoples to the hydro-electric engineers, via the pioneers of Nouvelle-France, the wood-runners, trappers, lumberjacks and log drivers… and soon, you!

A symbol?
Yin and Yang. In its heart of hearts, Authentic Québec is all about balance. The right equilibrium between urban and natural landscapes, adventure and relaxation, good planning and pleasant surprises… Find your balance and bring back home a slice of Québec casualness.

A quote?
In the Republic, Plato states that the secret of beauty and grace lies in simplicity. A quote that springs to mind when one visits Mauricie and Lanaudière.

A dream?
Well, let’s make it a dream come true on your holidays!