Open to all, welcoming everyone

In Trois-Rivières, this place of devotion to the Virgin Mary, whose original building was erected three centuries ago, constitutes an essential component of Quebec’s religious heritage.

When traveling along the south shore of the Saint Lawrence River opposite Trois-Rivières, you can easily spot its tall, cone-shaped silhouette. Dominating the vast expanse of water at its feet, soaring towards the heavens with its cross that towers 78.5 meters high, the Basilica at Our Lady of the Cape Shrine is striking with its bold octagonal architecture and imposing size. Though relatively recent (opened in 1964) this modern church, which boasts an impressive nave illuminated by splendid stained-glass windows, is part of a religious complex whose roots go far back in time. 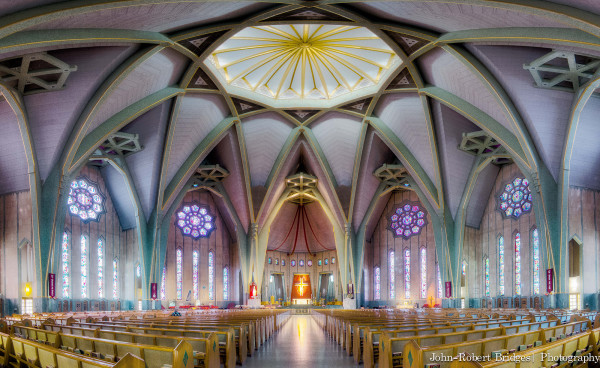 A witness and an actor of history

The oldest stone church in Canada was built early in the 18th century, on an ideal site in Cap-de-la-Madeleine, east of the Saint-Maurice River. This historical site, opened in 1720 and now known as the Old Shrine, witnessed not only the colonization and development of the Catholic religion during the time of New France, but also two miraculous events. At the end of the winter of 1879, the decision was taken to build a new church, which required that building stones be brought across the river from the south shore. As the winter had been particularly mild that year, the absence of ice on the river posed a problem. After much praying of the rosary by the faithful, a heaven-sent ice bridge took shape, dubbed the Rosary Bridge. Later in 1888, in this same Old Shrine, the statue of the Virgin Mary, which had recently been placed above the high altar, came to life, her eyes opening and staring straight ahead for several minutes. This is known as the Miracle of the Eyes. Because of these two miracles, Our Lady of the Cape became a key place of pilgrimage in Quebec. Open year-round, its green, lush setting in summer and attractive snow-covered winter landscape play host to many events. The most important ones are the Festival of the Assumption in August (candlelight processions, concerts and celebrations) and Christmas of Lights from mid-December to the beginning of January. In 2014, a Christmas market was added. 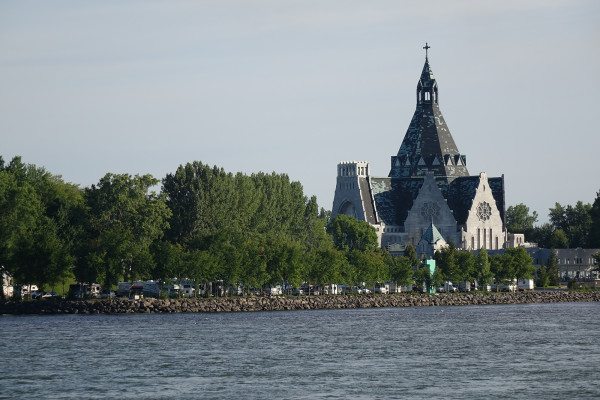