Known as Authentic Quebec, the Lanaudière and Mauricie regions offer a host of scenic vistas, experiences and encounters that immerse visitors in the heart and soul of Quebec. 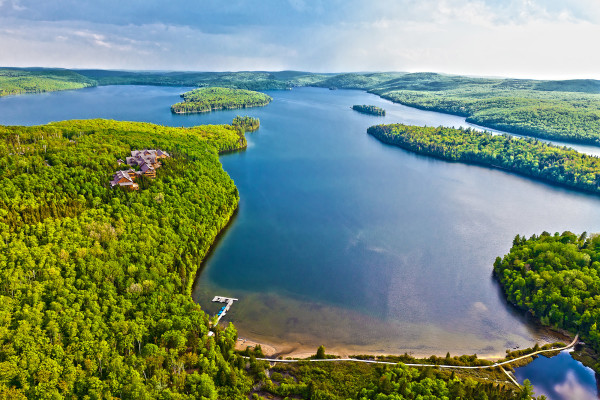 The Lanaudière and Mauricie regions, on the north shore of the Saint Lawrence River, have limitless appeal. Authentic Quebec is first and foremost the natural blending of these two areas. Geographically speaking, it is a nexus point: between the province’s two urban hubs, Quebec City and Montreal, feet anchored in the Saint Lawrence River to the south and head facing the northern stars. From the river’s fertile plain to the bold Laurentian Mountains, Authentic Quebec offers all of the Canadian Shield’s most compelling assets in terms of landscapes, life and diversity. It’s a distillation of the best of la Belle Province! It’s Quebec in its finest natural attire, such as we picture it in our dreams! It’s landscapes that shift with the seasons, from the lush greens and sparkling blues of summer to the blazing colours of fall to the majesty of winter. It’s the expanses of untouched nature, deep forests replete with birds and beasts, and the lakes and rivers guarding legendary fishing adventures. It’s the Quebec of First Nations people, lumberjacks, and backwoodsmen, and all the great human adventures that have shaped the identity of this area over the centuries. These lands preserve the memory of the pioneers of New France and that of the heroes of the country’s commercial and industrial era, when fur, wood, paper and hydroelectricity were leading commodities.

Forces of nature and a cultural breeding ground

Energy plays a big role in Authentic Quebec. That postcard-like beauty is anything but static. The Lanaudière and Mauricie regions are destinations meant to be experienced through immersion and action. And this is possible through privileged access to the immense natural world made available by the national and regional parks, as well as by the many resorts, inns, cottages and outfitters that offer direct contact with these huge playgrounds. These two regions also provide both country and city-based attractions, the former through its craft and gourmet offerings, the latter through its urban pleasures on a human scale, such as can be found in Trois-Rivières, Terrebonne, Joliette, Shawinigan or La Tuque, but with a vibrancy that will charm even the most citified of city dwellers. The heritage, the meetings, events and evolving cultures – these are all as intrinsic to these regions as are the wide-open spaces and the delights of the outdoors. And when it comes to added value, what makes these destinations unforgettable is their authenticity. You can develop true relationships here by taking the time to get to know the people and by talking to them – this is Quebec hospitality in its most natural and endearing form. Authentic, through and through!

Like a distillation of the best of “la Belle Province”; Quebec in its finest natural attire, such as we picture it in our dreams

Among the themed circuits of the Lanaudière and Mauricie regions, the river circuit is worth its weight in scenic value. From the Saint Lawrence River, beautiful Route 155 brings you up to the Haute-Mauricie region, following the Saint-Maurice River: a magic carpet leading to wide-open spaces!

Authentic Quebec at a glance